I’m late on this- I’d really love to blog more often! Hanging with the boy, keeping up with the outside world and also being in school is time consuming! But- I’m always going to make it a point to blog where blogging is necessary 😉

So without further adieu, LITTLE MAN IS 2 MONTHS OLD! Hims is still the best baby who ever lived. He still sleeps like a champ which is terrific for me for obvious reasons. He is smiling a lot now, which is also terrific for me for obvious reasons 🙂 The most recent discovery has been his hands- he holds them up in front of him and stares at them until he gets worn out and drops them on his poor little face. He has rolled from back to belly FOUR times!! None of which I have ever fully gotten to catch on camera, so Dad thinks I’m fibbing. Boy is also growing like a weeeed. His two month doctors appointment isn’t until the 15th, so I don’t know his exact weight and length right now, but wearing 3 mos clothes is a decent indication of where we’re at. Besides regular mile stones, he especially loves his bouncy chair, riding around in his Ergo, getting baths, playing with mommys hair (playing meaning pulling out) and kicking the crinkly spot on his activity mat. 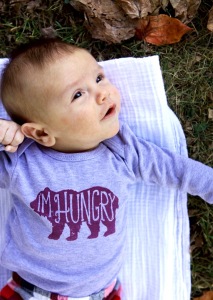 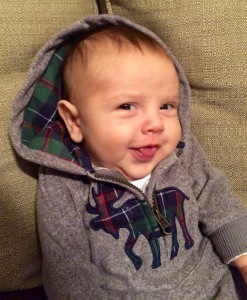 p.s. click on an image to find out where El gets his adorable clothes 🙂